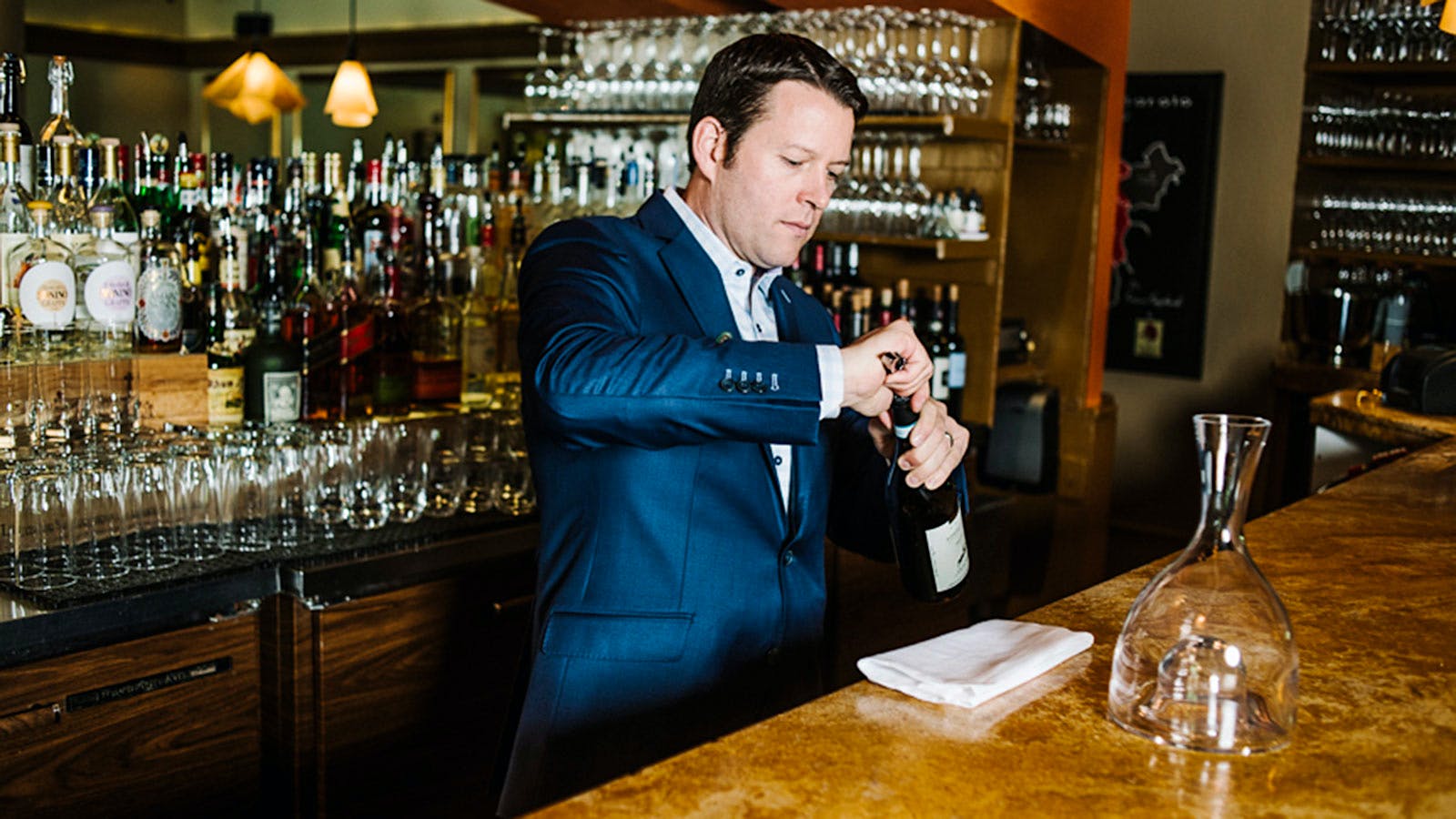 As the COVID-19 pandemic ravaged restaurant revenues across the United States this past year, authorities in 35 states threw eateries a lifeline in the form of relaxed alcohol restrictions, allowing restaurants to sell wine and cocktails to go in an attempt to support the struggling industry. Now that indoor dining numbers have picked up, diners across the U.S. are seeing a mishmash of changes, from permanent legalization to total reversal. It’s leaving hospitality teams relieved and grateful in some parts of the country, and fuming and concerned in others.

Even with significant markdowns required to compete with retail stores—often between 15 and 30 percent—to-go alcohol became a lifeline for many restaurants, especially at the onset of the crisis. At Wine Spectator Grand Award winner Barolo Grill in Denver, to-go orders of wine, liquor and beer represented 40 percent of sales when the shutdowns started in March 2020, then settled at a still-significant 20 percent in April. New York wine bar Anfora reported figures of between 10 and 30 percent, depending on the time of year. The temporary legislation also allowed restaurants, especially wine-centric ones, to create profitable off-premise programs like virtual tastings and classes.

Fifteen states have made the pandemic-era measures on to-go alcohol permanent as of June 22, according to the Distilled Spirits Council of the United States. Arizona, Wisconsin, Florida, Georgia and Texas are among them. The legislation in those states still requires the beverages to be sold in a sealed container and for each alcohol order to also include a food sale.

The news is a relief to the restaurants that integrated this service into their business models over the past year, like Houston’s Georgia James. “It’s something that I think all restaurants have wanted for a long time. It’s unfortunate what had to happen to make it come to be, but we’re really happy to have the option available to us now,” said wine director Matt Pridgen, whose entire list of 400-plus selections is available to go. “It helped tremendously early on.”

Pridgen notes that those sales have tapered a bit with the novelty, but about half of guests who pick up curbside orders still also order wine. And he sees opportunity to build to-go wine into a more lucrative aspect of the business, in part by capitalizing on the value that restaurants can offer over traditional outlets—namely service and access.

A helpful step on the path toward restaurant recovery

On the service front, restaurateurs say the benefits of wine to go start in the dining room but extend beyond. “It’s an added value to people that come in for dinner and maybe have a great bottle and want to take another one home to enjoy another time, or they’re celebrating an anniversary and they have a special bottle and want to do it again next year,” Pridgen said.

Barolo Grill has taken a similar approach since it reopened for dine-in in January, so owner Ryan Fletter was “elated” in June when Colorado extended the relaxed alcohol-to-go restrictions through July 1, 2025, the latest of several states—including Michigan, Maryland, California and Delaware—to extend the measures temporarily.

“It’s a really nice symbiotic relationship,” Fletter said. “We’re adding another service.” This includes everything from hand-selecting wine packs for guests to selling them a bottle, or several, to take home after dinner, which is often sparked by mid-service conversations between diners and the wine team. It can even boost food sales, as some patrons coming to pick up wine will then opt for a food pick-up too.

While off-premise alcohol has “without a doubt” boosted wine sales and is helping repair damage from the past year, Fletter says that to him, the benefit is more about guest connection than revenue. It’s an extension of the hospitality in the restaurant, allowing people to take the experience with them, and often to share it with others. “They’re looking at this wine a week or two, or a month later, and saying, ‘Here’s that wine they sent us with, remember that dinner we had too?’ It’s almost ethereal,” he said. “It’s like having a little bit of Barolo Grill even if you’re not dining in Barolo Grill that particular evening.”

Wine-focused restaurants have had one edge over retailers: Thanks to years-long industry relationships, restaurants with strong wine programs are able to source rare and highly allocated wines not available to retailers.

Houston’s historic Rainbow Lodge is another restaurant that’s been able to leverage this position. Beverage director Marc Borel says he’s stocking much more expensive wines than in the past. “The most expensive thing we had on the list might’ve been a Domaine de la Romanée-Conti, and it was pretty much a placeholder; now we’re selling a bottle in the category two or three times a week,” he said. “A lot of times our customers don’t have access to those kinds of wines.”

Like Fletter, Borel says it’s all about adding another layer of hospitality. “That’s what’s kept us around for 45 years—this is an experiential place. So to be able to give a little piece of the lodge to be taken home to enjoy at home is a big deal for us. We love that.”

A bit of breathing room for some, and none for others

For Fletter and others in states with only temporary extensions, the announcements at least allow some time to plan and adjust their business models once again. It also means they can get more creative with off-premise beverage initiatives and have some fun, instead of being stuck in survival mode. “We were always on the edge of, ‘Are they going to make us go back to the way it was?'” Fletter said. “So just having it longer than a 30-day or one-year extension at least gives us a little breathing room, mentally, which is really important right now.”

New York restaurants aren’t as fortunate. Restaurants in the state had their to-go alcohol privileges promptly stripped with the expiration of Gov. Andrew Cuomo’s emergency order after June 24, despite proposed legislation to extend the allowance. Restaurateurs received notice on June 23. Pennsylvania’s Liquor Control Board made a similarly abrupt announcement on June 15, reversing eased restrictions on to-go alcohol and outdoor dining structures.

Cody Pruitt, general manager and beverage director of Anfora, says that he wasn’t surprised. “[New York’s state and city governments have been] continuously moving the goalpost and acting last-minute and without clarity, in addition to their obvious and complete disregard for not only hospitality but small business health and longevity,” he said. “Whether they’re consciously being predators or not, it’s severely damaging to myself and my colleagues’ businesses.”

It was a blow to New Yorkers too, 78 percent of whom supported a permanent extension of alcohol to go, according to the New York State Restaurant Association. “Only in New York would elected officials ignore an overwhelming majority of the public,” read a statement from Melissa Fleischut, the association’s president and CEO. “Restaurants are struggling to find staff, keep up with rising costs and manage a limited supply of goods, and nearly two-thirds of the applicants will not receive [federal] Restaurant Relief Funds. New York state must do more to help, not hurt, our restaurant industry.”

Pruitt is especially frustrated by the poor communication—some of his industry peers weren’t even aware of the change until he broke the news—as well as the inconsistencies of the law. Beer and hard seltzers, for example, have been and continue to be legal for restaurants to sell to go. “You tell me,” he asks rhetorically, “What’s more likely for a customer to drink on the street illegally? A can or bottle of beer, or a bottle of wine?”

Pruitt is putting any extra selections he’d planned to sell to go on the main wine list for dine-in, even if they’re more suited to off-premise sales, but he has industry friends that are facing significant problems with excess inventory, particularly packaging. He said he knows of several businesses that invested thousands of dollars in packaging for wine clubs and cocktails to go, and are now stuck with customized empty bottles and labels they can’t use.

Gov. Cuomo said the change was a natural consequence of ending the emergency order, but lobbying by competing retail stores likely played a role as well. That’s one reason behind the food requirement with alcohol to go in states that are permitting it, like Texas. “Any time you make a change like this, you want to make sure you’re inclusive of all the viewpoints and all of the concerns within the industry,” Chris Porter of the Texas Alcoholic Beverage Commission told Wine Spectator.

So while some restaurants are celebrating, others are dealing with what feels like the latest in a series of blows for the industry. “I think there has been some good things coming out of this in terms of restaurant support,” Pruitt said. “And yet, I feel that the overall awareness of the plight of the restaurant, even pre-COVID in terms of our slim margins, has been acknowledged in the past year and then quickly ignored once again.”