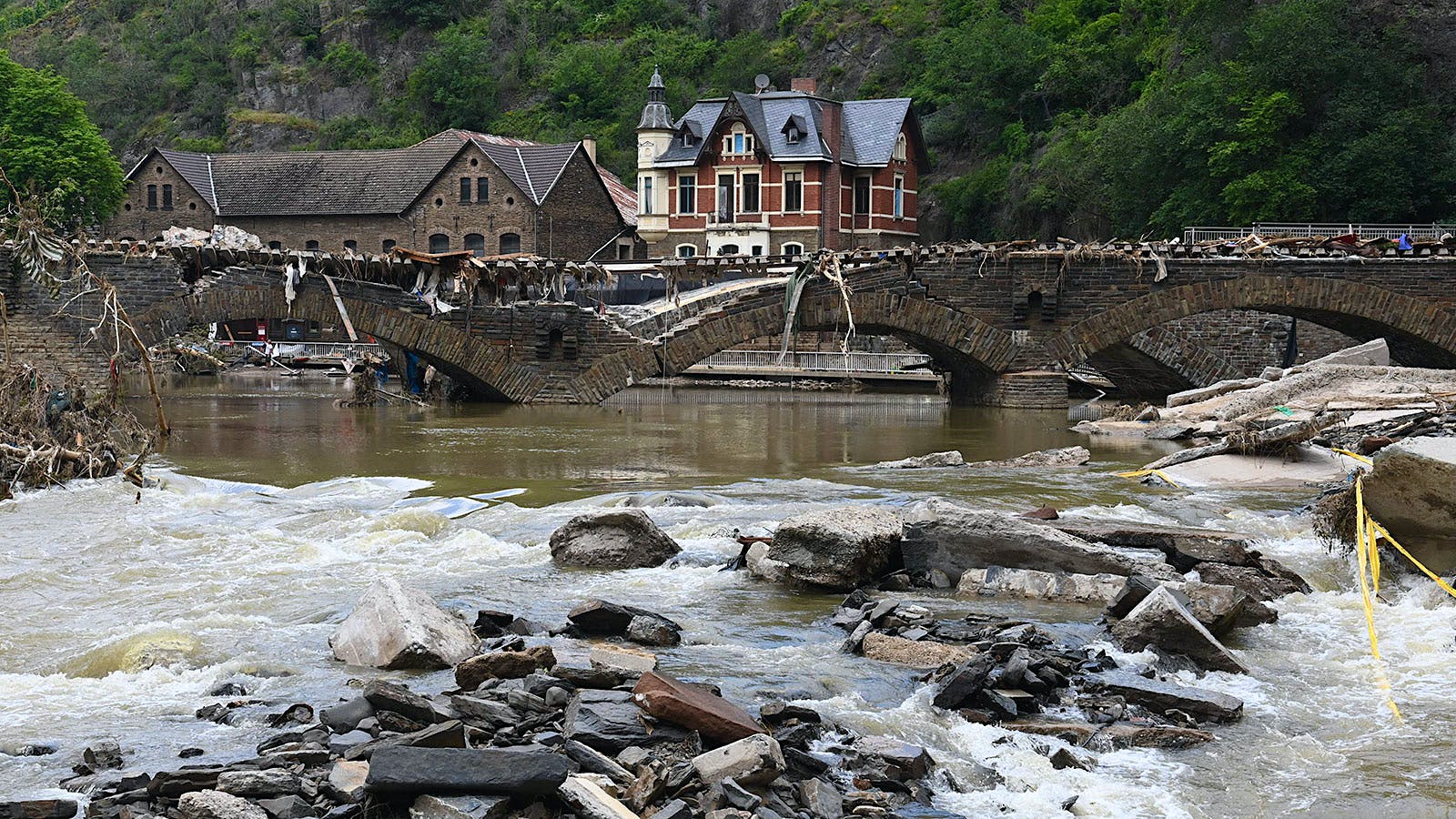 Torrential rains in Northern Europe last week triggered devastating flooding in parts of Germany, Belgium and the Netherlands. The rain caused rivers to overrun their banks and in some cases sent torrents of water surging through towns and villages. Some wine regions in northwestern Germany suffered extensive damage, with the full impact yet to be known. Vintners in regions where the flooding was less severe have been dealing with water in cellars and mildew problems in vineyards, but many are focusing on organizing wine-industry relief efforts for harder-hit areas.

The rain began last Tuesday as moisture from the Mediterranean parked itself over Germany, Belgium and the Netherlands and stalled. In some parts of Germany, two months’ worth of rain fell in 24 hours, according to the Deutscher Wetterdienst, the national meteorological agency. Parts of the Rhine and its tributaries in Germany and the Meuse river in Belgium and Holland quickly overflowed. At least 183 people in the three countries are confirmed dead as of Monday, with dozens more missing after floodwaters swept through towns, destroying roads and bridges and pushing cars and trucks through the streets.

The Ahr Valley, a tributary of the Rhine about 75 miles north of the Middle Mosel region, was particularly ravaged, with the death toll at 117 in the area and people still missing. The steep slopes flanking the river are planted mainly to Spätburgunder (Pinot Noir), and are the source of some of Germany’s best examples.

Johannes Hasselbach, who makes the wines at his family’s Weingut Gunderloch in Nackenheim in the Rheinhessen area, noted there was no damage from flooding there. So over the weekend, he organized a group to help clean up at Meyer-Näkel in the Ahr.

“It’s a huge mess. It will take months before you can even think of starting to build up again,” he told Wine Spectator. “Except for the bare walls of [some of] the buildings, there is nothing much left: furniture, cars, tanks, presses, tractors—all gone. No water, electricity or cell phones.”

“They need so much help,” he added. “Also in the vineyards. The only thing many have left is out on the vines.” He believes vintners will not only need to figure out where to press and ferment by harvest, but also will need a lot of manpower to look after the vineyards until harvest as there is no machinery.

The Mosel region also endured flooding, something the producers deal with occasionally. “On Tuesday and Wednesday it was raining with such an intensity all day and night that the soil just couldn’t take it,” said Nik Weis, proprietor of Nik Weis St.-Urbans Hof in Leiwen, across the river from Piesport. “The water was flowing on the surface straight into the rivers, which started to rise exponentially.” Fortunately, his winery is well above the flooding and did not suffer damage.

“Normally when we have floods, it builds up over days or weeks, mostly in the winter or spring when, in addition to the rain, snow melts on the mountains. When that happens, the water rises slowly and people have time to prepare,” he added. “This time it was like a tsunami. It came quickly and totally surprised everyone.”

At Selbach-Oster, downriver in Zelting, owner Johannes Selbach and his son Sebastian were forced to make a quick rescue mission in the cellar. “On the Mosel we are used to getting flooded so most everybody along the river used the remaining time to prepare for the water,” he explained. “That being said, it was still a big mess and it caused minor damage. Sebastian and I had to swim into our barrel cellar to secure a number of fermenting fuder barrels so that there wouldn’t be an exchange between wine and water.”

Egon Müller of Scharzhofberg in the village of Wiltingen in the Saar Valley, a tributary of the Mosel, also reported no damage from flooding, just additional work in the vineyards due to the rain. However, the area from Trier on the Mosel river to Saarburg on the Saar river was impacted.

Teams from the unaffected areas are organizing to help the Ahr growers in their vineyards so they can focus on the cleanup. Nik Weis and his son also delivered a mobile generator to Meyer-Näkel.