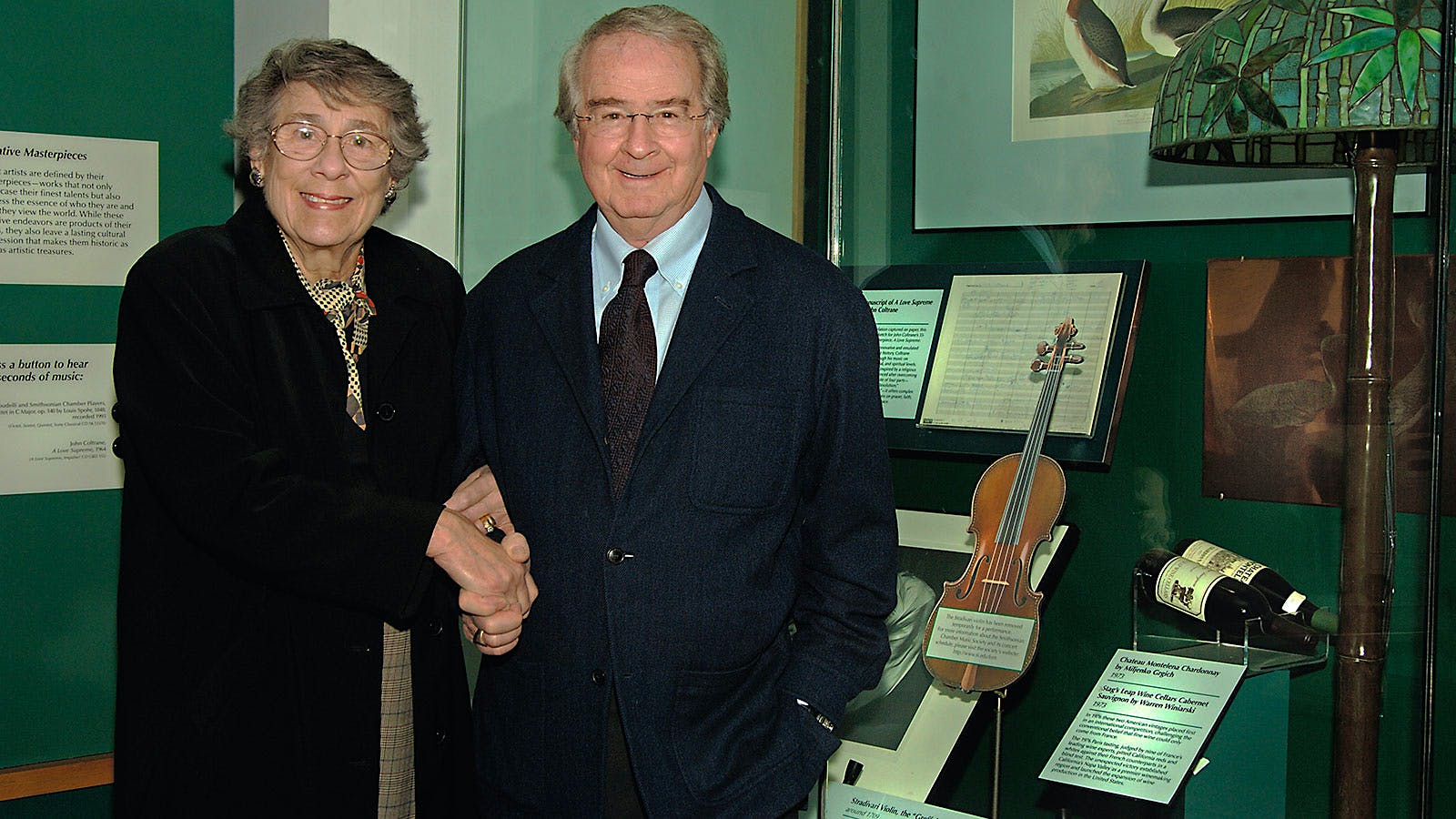 Stag’s Leap Wine Cellars founders Warren and Barbara Winiarski made waves when their Cabernet Sauvignon stood out at the Judgment of Paris in 1976, enhancing the reputations of their winery and of Napa Valley. They enshrined their legacy 20 years later when they donated $50,000 to the Smithsonian Institution’s National Museum of American History to fund a research initiative on Napa and U.S. wine history, which helped establish the museum’s American Food History Project.

On June 7, the Smithsonian announced that the Winiarskis will help ensure that project’s future with a $4 million bequest.

Fittingly for the Smithsonian, the Winiarskis say their donations were partly inspired by U.S. history. “I like to imagine that Thomas Jefferson would be gratified to see how far we’ve come as a wine-producing country,” Warren told Wine Spectator via email, “as a man who believed that wine had a civilizing effect on society and that America would one day make wines ‘doubtless as good’ as any in the world.”

But Warren has his sights on the future too and hopes this endowment will preserve the Food History Project. In addition to supporting exhibitions, collecting and research, the latest donation will fund a new museum curatorship—the Winiarski Curator of Food and Wine History. “Barbara and I are especially pleased that the permanent [curatorship] includes ‘wine’ in the position’s title,” said Warren. “The title not only acknowledges wine’s correct place at the American history table, it also brings the arc of the American wine story full circle.”

The Smithsonian team is hoping to raise additional funds through their newly launched “25 at 25 Initiative: Food Fund for the Future,” which marks 25 years since the Winiarskis’ initial donation and the exhibit it funded, ‘Red, White & American: Wine in American History and Culture.’ Their goal is to obtain at least 25 gifts of $25,000 each, and the Julia Child Foundation for Gastronomy and the Culinary Arts has already promised a donation. (Julia Child’s kitchen was one of the Food History Project’s first acquisitions, and remains a core exhibit.) Besides providing general support, this initiative will help the Smithsonian present food history to—and collect research from—a broader range of people.

“We are delighted and so very grateful to the Winiarskis for their vision of documenting the impact of viniculture and the evolution of American winemaking and accompanying food culture,” said the Smithsonian’s Elizabeth MacMillan director Anthea M. Hartig, in a statement. “Their support over the decades and this generous bequest will sustain and enhance the nuanced and central place of food and wine history for the benefit of our many audiences.” The Smithsonian’s food and wine programs will be celebrated at a Nov. 4 event hosted alongside the presentation of the 2021 Julia Child Award.

Now the owners of Napa’s Arcadia Vineyards, the Winiarskis notably sold Stag’s Leap in 2007 to a partnership of Washington’s Ste. Michelle Wine Estates and Tuscany’s Piero Antinori for $185 million. Their iconic story became part of the National Museum of American History’s permanent collection when they gave the Smithsonian a bottle of their 1973 Cabernet, the same vintage that won the judges’ nod in the red category at the Judgment of Paris.